Indian Weddings Home Remedies Ayurveda Vastu Yoga Literature
Dragon tattoos are a rage with tattoo lovers. Due to their versatility in terms of size and design, dragon tattoos can be drawn to grace any part of the body. Check out dragon tattoo designs.
Body Art : Tattoo Designs : Dragon Tattoos 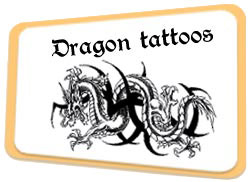 A symbol of power and danger, dragon has always been an object of attraction. They have emerged as a popular design for tattoos. Due to their versatility in terms of size and design, dragon tattoos can be drawn to grace any part of the body. Dragon tattoos have been used to symbolize various emotions like luck, freedom, rage and destruction. According to the historical records, men tattooed the images of tattoos upon their body to denote power or protection, as men were considered the guardians of the society and the family.

Eastern Dragon Tattoos
The eastern dragon is worshipped by Chinese people, who are believed to be the descendants of the dragon. The beautiful eastern dragons are considered as the symbol of luck and positive energy and are friendly. They are characterized by beards with whiskers, long slender body and four short legs. Majority of eastern dragon tattoos are colored red or green. However, you may choose any color for the ink, as per your wish.

Western Dragon Tattoos
Contrary to the eastern dragons, the dragons in the western world are seen as villainous. They are imagined as fire-breathing dragons, which terrorize the villages, abduct women and children. They resemble serpents, in terms of their powerful and muscular bodies. The western dragons are characterized by four strong legs, a wedged shaped head, pointed teeth and large wings, which gives them the ability to fly high.

Japanese Dragon Tattoos
It is a popular belief that Japanese dragon tattoos are symbol of freedom, power and kindness. Hence, it is a custom for the people living in Japan to get dragon tattoo done on their body parts, typically the arms. The Japanese dragons are characterized by serpent-like bodies, small legs, three toes, four claws and are wingless.

Chinese Dragon Tattoos
You can find a wide variety of Chinese dragon tattoos. Among them, the most common is the Horned Dragon, which is believed to produce rain. Other types of dragon tattoos include Winged Dragon (the only dragon to have wings), Celestial Dragon, Spiritual Dragon, Hidden Treasure Dragon, Coiling Dragon, Yellow Dragon, Underground Dragon and Dragon King. Apart from these types, Chinese zodiac dragon tattoos are also available.

Dragon & Tiger
These are the two most powerful symbols of the world. Bringing them together in a tattoo reflects the balancing of the primordial subsistence of Yin and Yang. The tiger is the symbol for courage, bravery, raw energy, pride, glory and dignity in most of the popular cultures. When this is combined together with the symbol for wealth, luck, wealth and profusion, which is the dragon, then nothing can beat it.

Dragon In The Clouds
Clouds stand for heavenly existence of the super consciousness and celestial mobility as in most of the mythologies the gods or immortal spirits were said to have used clouds as their vehicle to move around. In pagan culture clouds were worshiped as god because it was considered as a carriage for the rains which helped in the growth of plenty of crops. So it is a symbol for good luck. Putting a dragon on the clouds means that luck, wealth and abundance is transported from the celestial spaces right in your direction.

Dragon Surrounding A Pearl
Pearl is mostly the representative of the moon. Pearls are often associated with dragons, especially in the Chinese mythology. One of the very famous Chinese legends has a story of a dragon’s obsession with the moon. In his infatuation he goes crazy and tries to steal the moon from the sky and keep it with him. There are other tales where the pearl is associated with the dragon in a way that it is called the egg which the dragon puts beneath its chin and carries it around everywhere until it is hatched. Basically a pearl when put together with a dragon represents the dragon’s wisdom.

Dragon With The Phoenix
Just like the tiger and the dragon, the phoenix and the dragon also represent the perfect balance between the Yin and Yang. In their own respect, each of these symbols is very powerful and strong. Together they characterize for unshakable power, friendship and success. It stands for a perfect match for money and luck. In some cultures it is seen as a symbol for a dynastic union, where the dragon stands for the patriarch and the phoenix stands for the matriarch.