Indian Weddings Home Remedies Ayurveda Vastu Yoga Literature
Though people used to get different kinds of tattoos since immemorial time, its meaning and purpose were very different from what it is today. Find out more in this article.
Body Art : Purposes of Tattooing 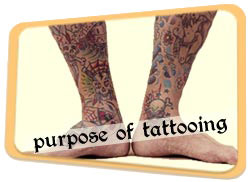 Tattooing is a very old art known to mankind since immemorial time. Though this art has recently become a new fashion statement, it has been done in different regions for different reasons. People sport different kinds of tattoos from their zodiac to birth signs, from celestial symbols to their beloved's name. Some people also get religious hymns engraved on their body. Though there is no hard and fast rule for where to get a tattoo done, people generally get tattooed on arms, lower neck and ankles. Some people even get tattooed on their shoulders, hip bones and back.

Purpose of Tattooing In Different Era And For Different People
Though people used to get different kinds of tattoos since immemorial time, its meaning and purpose were very different from what it is today. Given here are some ancient and modern purposes of tattoo.

Medal for courage
Tattoos were also engraved as a symbolism of courage. Soldiers used to get the tattoos like swords and arches engraved on their hands. There were at times given the royal emblem in the form of tattoo as the medals for courage.

Punishment
People who were sent on exile or captured as criminals were also tattooed in order to make them bear the brunt of their crime forever in the form of shame. The slaves from various places were also marked with tattoo so that they do not run away.

Cosmetic reasons
In present times, the tattoos are the most in thing in fashion world. People sport a tattoo to exhibit their fashion forwardness and coolness. At times tattoos are also used for hiding skin discolorations.

Sentimental reasons
The Sentimental reasons are the prime reason that people get tattooed apart from being a fashion chic. People often sport the name or zodiac of their parents, kids or beloveds to show the permanency of their love.

Tattooing For Health
Tattoo art is being practiced in India since immemorial times. In different times people had different reasons to get tattooed. In the monarchial era, it was done as the symbolism of royal lineage, medals of courage, as religious symbolism and also as the symbol of shame for the criminals and exiles. People today generally sport a tattoo for the cosmetic, sentimental and religious purposes. However, in some regions of South East Asia and South Pacific, tattoos have also been used for health purposes.

Tattoos For Protection
Tattoos in different regions of the world are done for different purposes. There are health purposes, there are cosmetic purposes, there are customary purposes and then most commonly there are cosmetic purposes. Apart from this, in many countries, the tattoos are done for protective purposes. In many cultures tattoos are regarded as the protective amulets. Most of these beliefs have somehow originated from their religious beliefs.

Religious Tattoos
There are enormous reasons for which people get tattooed. These reasons depend upon the customary and religious relief of the people in the region. More or less, all the other reasons like health and protection revolve around the religious beliefs of people and their staunch believe in their deities. Though some of these religious beliefs have scientific back up, most of them are done simply due to the extreme faith of the people in this art as well as their religion.