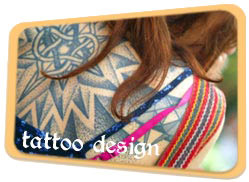 With the increasing popularity of the tattooing, the designs for the body art are also increasing. In the present time, more and more designs, both intricate and simple ones are being created by the tattoo artists. When in one case, these designs are used to symbolize faith in religion, while others are used to express a particular thought or emotion. Mythical characters such as fairies and dragons, symbols such as Cross and creatures such as butterflies are often feature in the wide variety of tattoos. Tattooing has emerged from being a religious to a modern art, which is a symbol of fashion statement in the present time. In this section, we have discussed about the most popular tattoo designs.

Butterfly Tattoo Designs
Butterflies, the tiny insects with colorful wings, are one of the most chosen subjects for artistic expression in the field of painting and music. The lively, colorful butterflies can also be found in clothing, bags, jewelry, hair clips and almost everything that has to be made colorful. The beautiful creature also features in the coloring books of children,

Celtic Tattoo Designs
Celtic tattoos are one of the most popular tattoo designs. The wonderful thing about Celtic tattoos is that there is a wide variety of designs to choose from. The designs for this type of tattoos are derived from an old European culture. In the ancient times, the Celtic people covered much of the parts of Europe and boasted of having a unique language

Cross Tattoo Designs
The Christian cross, a symbol that represents the crucifixion of Jesus Christ, is a vertical line intersected at right angles, about one third from its top. It is used by people following Christianity, to show their faith in the religion. Clergymen use it to bestow blessings upon people. In the present time, Christian tattoos are popular way for people to express their faith in Christianity.

Dragon Tattoo Designs
A symbol of power and danger, dragon has always been an object of attraction. They have emerged as a popular design for tattoos. Due to their versatility in terms of size and design, dragon tattoos can be drawn to grace any part of the body. Dragon tattoos have been used to symbolize various emotions like luck, freedom, rage and destruction.

Fairy Tattoo Designs
With their supernatural powers, cutesy appearance and psychic abilities, fairies have been dominating the fantasy world since ages. Now, they have expanded their popularity, by traversing right from the fantasy books and movies all the way to the body art parlors. The mythical characters have emerged as one of the elements of the most happening

Tribal Tattoo Designs
Originally, tribal tattoos were used to identify members of specific tribes, to represent battles fought and to indicate social status of the tribal people. Today, tribal tattoos have emerged as a popular body art adopted by city dwellers as well. It is heartening to find that the tribal tattoo art is on the revival track. The tribal youth are now sporting tattoos prevalent in their tribes.

Zodiac Tattoo Designs
Tattoos have become one of the most happening style statements. Not only do they look cool, they also give a very aesthetic touch to the beauty of the owner. People go for several kind of tattoos, right from their beloved's name to religious hymns. One of the most popular tattoos however has been the zodiac tattoos.