Indian Weddings Home Remedies Ayurveda Vastu Yoga Literature
The designs of tribal tattoos are influenced by tribal art prevalent among tribes, such as the Celtics, the Maoris, and the other tribes. Check out different types of tribal tattoo designs.
Body Art : Tattoo Designs : Tribal Tattoos 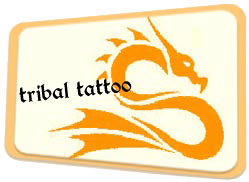 Originally, tribal tattoos were used to identify members of specific tribes, to represent battles fought and to indicate social status of the tribal people. Today, tribal tattoos have emerged as a popular body art adopted by city dwellers as well. It is heartening to find that the tribal tattoo art is on the revival track. The tribal youth are now sporting tattoos prevalent in their tribes. This art has traveled to the Western countries as well, where it has generated interest among the Westerners. The body art is a way to express personal freedom and exude uniqueness in one's self. With its simple appeal, it reinforces a positive feeling about one's self and connects the person to the mystic rituals that were prevalent among tribal people.

The designs of tribal tattoos, as the name suggests, are influenced by tribal art prevalent among tribes, such as the Celtics (tribal people living in Ireland, Scotland and Wales), the Maoris (tribal people native to New Zealand), the tribal people of North American, African origin and the indigenous residents of Borneo. Dragon, butterfly and sun tribal designs are some of the most common tribal tattoos, which can be put virtually anywhere on the body. Heavy lines and colors are generally used to create the image. Apart from being an attractive body art, tribal tattoos can also be a symbol to convey a meaning through the design you choose. Here in this article, we have discussed about tribal tattoo art.

History
In the olden times, tribal tattoos were used to establish the unique identity of a particular tribe. It was also a medium to convey one’s religious and spiritual convictions. Tattoos in the ancient times, amongst tribal people, was used as a strong source of camouflage in order to hide in the forest. The tribal tattoos used in the modern times, for the purpose of beautification and fashion, are generally the adaptations from Aztec, Samoan, Polynesian, Indian, Hawaiian, Egyptian, Mayan and Maori tribes. These tattoos, apart from their unique identification and camouflage purposes, was also used to elevate the social status and for medical reasons. These tattoos were thought to have supernatural and mystical meanings and power. The origin of the word tattoo goes way back to the Polynesian culture. They used to call it ‘tatau’. All the people from the Polynesian tribes were tattooed as it was considered as a language form at that time. These tattoos were made basically texts incorporated around an image. This image usually comprised of shark teeth, images of geckos, tigers, etc. for protection and luck. Maori tribe from New Zealand had a trend of facial tattoos. Everyone’s facial tattoo was unique and different from one another. This was their representation of the inner strength and spiritual awakening. They believed that when a person dies and the light of heaven shines on to him/her face, the tattoo becomes his/her only identification. The Indian tribe that lived on the northwest coast of America called Haida, had more masculine, raw and vigorous kind of tattoos. They believed that once a person is tattooed, he/she takes on the strength of an animal. Borneo tribe from Indonesia used tattoos as a symbol for success, courage and pride.

Maoris Tribal Art
As far as the Maoris are concerned, you will find people sporting 'Moko' designs. Originally, it was their own way to show their prestige and the transition of one social status to one another. Moko designs are wonderful tattoos to behold.

North American Tribal Art
You can find different traditions for tribal tattooing in North American tribes. The tribal tattoos denoted rank within the tribe. It was a common to find weapons of war being tattooed upon men. Their women counterparts used to receive tattoos of tools used for labor.

Samoa Tribal Art
The tattoos in the Samoa tribe were carved into the flesh by using a tool made of a carved boar tusk, sharpened with a piece of coral, secured to a turtle shell and then attached to a stick. The wound thus created was healed by rubbing a mixture of candle nut soot and sugar water into the flesh.

African Tribal Tattoo Art
The tribal tattoo art prevalent in Africa was a bit different from others. Instead of using a pigment for tattooing, the tribes used to cut the skin. The wound thus formed was healed by rubbing with ash or sand, until the wound rises up. The scar thus created was their tattoo.

Borneo Tribal Art
The concept of tattooing in the Borneo tribes was different. According to them, tattooing an object or creature on their body helped them to draw energy from these spirits, since they believed that spirits are in everything surrounding them.