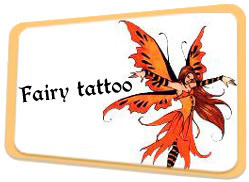 With their supernatural powers, cutesy appearance and psychic abilities, fairies have been dominating the fantasy world since ages. Now, they have expanded their popularity, by traversing right from the fantasy books and movies all the way to the body art parlors. The mythical characters have emerged as one of the elements of the most happening trends in the fashion world - tattoos. The fashion buffs, especially women, are fascinated by fairy tattoo art, which mainly uses the design of the adorable, naughty and tribal fairies.

Various poses of fairies, both cute and seductive, are combined with flowers, hearts, crosses, glitter, stars, sun and other fantasy themes to create the magical piece of body art. Fairy tattoos are available in different colors, ranging from red, yellow, orange, purple, green, blue to black and white. They are usually tattooed on lower back, ankles, shoulders, arms, upper back and the chest area. Learn more facts about fairy tattoos in the following lines.

History
Fairies are the characters found in old legends, portrayed as magical spirits. A fairy does not have a definite look or purpose or origin, any magical character in mythological folklores is referred to as a fairy. Fairies are usually depicted as a creature with human appearance but with enchanting powers. Sometimes they are illustrated as very small in size and on the other occasions they are shown as exactly the size of a human being. Sometimes it is depicted that fairies can change their size and looks, in order to perform their magic and fulfill their magical purposes. From time immemorial, fairies are thought of as souls of dead people, separate from the rest of the human race. These creatures were sometimes also given a negative outlook and thought of as demons or vile seductresses. Fairies with wings were seen very commonly in the artwork during the Victorian era. This was not common in the era before that because fairies were thought out to be the kind of creatures that used magic to fly and sometimes they were shown flying on the back of birds in the pictures. In modern times, fairies are shown with mostly long and tall butterfly wings. It is a popular choice for tattooing amongst people, especially women, mostly because of its beauty aspect but there is a meaning connected with fairy symbolism. An illustration of a fairy could mean innocence and happy childhood memories since there is a very strong connection between fairies and our childhood as we all were told numerous fairy tales by our elders which have left a deep impression on our minds.

Tinkerbell Fairy
One of the most adorable fairies, Tinkerbell, now features in the fairy tattoo art. You may choose a series of small sized Tinkerbells linked to each other in flight, as the design for your tattoo. Consult a skilled artist to make this charming tattoo on your upper arm or ankle.

Flower N Fairy
A popular design chosen for tattooing, the 'flower n fairies' looks attractive due to its romantic and picturesque appearance. You may choose vibrant colors such as red, shades of pink for the flower and the fairy. Try to make it as colorful as possible, but do not overdo it.

Heavenly Fairy
A cute fairy resting atop a crescent moon would grab all the passing glances. Consider adding substance to the design, by setting the fairy in a backdrop of nighttime sky and twinkling stars. Heavenly fairies would look good in lower back or chest area.

Tribal Fairies
The traditional tribal fairy tattoo art is here to stay. The design is very attractive, with a fairy figure that is not too cutesy, unlike her adorable counterparts. Add the typical wilderness of tribes to the design, by making the figure look sharp. You may consider using black, white and shades of gray for the tribal fairy. The design looks remarkable on lower back and shoulder.

Naughty Fairy
Apart from being light-hearted, extremely kind and having a magical sense, the fairies can also be naughty at times. Think of getting a naughty fairy with a seductive, shadowy figure in black and gray, tattooed on your arms, and get ready to flaunt it at a night party!

Fairy With Her Fairy Dust
Fairies are often portrayed sprinkling around their fairy dust, which is made of stars and other celestial bodies. In this type of tattoo, colorful fairy dust is incorporated with the fairy tattoo.

Gothic Fairy tattoo
This is a little dark-sided fairy tattoo. There is nothing cute about this one, in fact it shows gloomy, grotesque and supernatural version of the fairy, which is completely opposite to the traditional outlook on it. It represents the raw carnal urges and rebellious side of femininity.