Indian Weddings Home Remedies Ayurveda Vastu Yoga Literature
Celtic tattoos are one of the most popular tattoo types and the designs for these types of tattoos are derived from old European culture. Find out more information.
Body Art : Tattoo Designs : Celtic Tattoos 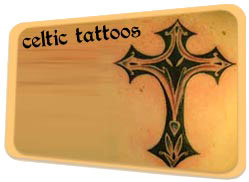 There are very interesting Celtic themes, which can be combined with the designs of flowers, animals, sun, moon, stars and skulls. They look terrific on any body part, such as armbands, lower back, ankles, shoulders, upper back area. Like the tribal tattoo art, Celtic tattoos are growing at a fast pace. People with Irish, Scottish or Welsh origin often use the Celtic design to express their pride in their heritage. The best way to serve the purpose is to make use of a Celtic tattoo. The interlacing patterns, complex knots, colors and the use of various symbols (such as the Cross) together make the Celtic tattoos one of the most popular types of the body art. Rather than representing a tangible object, the Celtic tattoo art conveys the inner feeling. Read more about Celtic tattoos in the following lines.

Celtic Cross
A Celtic cross in design is a conventional Latin cross with a big ring at the interaction. It is said to be created by St Patrick but it has changed since the time of its creation. It is the representation of the time and bridge between the earth and heaven. The vertical arm is the symbolization of the spiritual world while the horizontal arm depicts the earthly life. The big ring at the intersection is the symbol of god’s unrestricted and never ending love for his children. The never ending part is symbolized by many interlinked round circles within the big ring. These interlinked spirals do not have any end or beginning depicting the eternalness of spirit and god’s love. It was created to convert the Pagan Irish people. Some people believe that it is a variation of the sun cross.

Celtic Knots
Celtic knots are looped and intertwined, which makes them intricate. Some people believe that Celtic knots are the symbol of eternity, because the knot work depicts endless loops. They are the best tattoo designs to convey some spiritual meaning. Beautiful though, they are very intricate to create and can be done only by a trained tattoo artist, who knows about making the loops of the Celtic knot.

Celtic Butterflies
Celtic culture very closely relates itself to the nature and all the elements of nature. They were pagans, nature worshippers and that is the reason why everything held a special meaning for them –– the sun, the moon, rocks, grass, birds, river, everything. Butterflies were seen as an important element of the nature, representing renewal and rebirth. It was popularly believed that butterflies, and also other winged insects, had human souls. According to their folklores, butterflies fly around from place to place in search of a new mother and when this loving woman was found, butterfly would hide in her food and be consumed only to impregnate her and then be born as a human baby. But they also believed that a butterfly flying in the night was a messenger of an awaiting death.

Celtic Triskele
This is a Celtic tattoo that is made up of three spirals interlinked with each other. Spiral was one of the most popular symbols of the Celtic culture as it represented the sun, the death and the reincarnation. It also symbolized pregnancy or childbirth as this symbol represents nine months time which is exactly the kind of time period involved in human gestation. In some meanings it also represented the three main elements of life –– the earth, the water and the sky. The close interrelation between the spirals shows the never-ending and a strong connection between the physical and the spiritual world, which is a popular theme in all of their art forms. The clockwise movement of the spiral is said to characterize growth, development, maturity and expansion. This movement also signifies an equinoxes.