Indian Weddings Home Remedies Ayurveda Vastu Yoga Literature
If you are looking for a tattoo design that is loaded with meaning and symbolism, then cross tattoos will be the best bet. Check out different types of cross tattoo designs.
Body Art : Tattoo Designs : Cross Tattoos 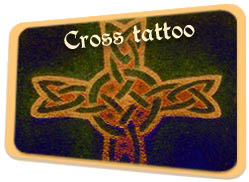 The Christian cross, a symbol that represents the crucifixion of Jesus Christ, is a vertical line intersected at right angles, about one third from its top. It is used by people following Christianity, to show their faith in the religion. Clergymen use it to bestow blessings upon people. In the present time, Christian tattoos are popular way for people to express their faith in Christianity. In fact, it is one of the popular designs used in the body art.

A cross characterizes spiritual quest and heavenly healing. It is popularly believed that the four points of the cross are the symbols for the inner self, the nature, the higher wisdom and the higher being. A cross is used for the symbol for trust, faith, sacrifice, hope, patience and life. It is a connection between a human being and the super consciousness. As a sign for crucifixion of Lord Jesus Christ, a cross characterizes the sacrifice that Jesus Christ made for us mortal beings, sacrificed his life for our spiritual emancipation.

If you are looking for a tattoo design that is loaded with meaning and symbolism, then cross tattoos will be the best bet. Sporting a cross tattoo is socially acceptable and can be created almost any size, placed anywhere on the body. The versatile design is endlessly adaptable and expandable. For instance, the cross tattoo design can be combined with heart, flowers, wings, writing or animal.

Latin Cross
The Latin cross is one of the most chosen designs for the body art. It is one of the most common forms of Christian crosses. It is a favorite amongst the Protestants, reminding the Christians of Christ’s eternal sacrifice. It is recognizable easily, because it typically consists of a vertical line intersected at right angles by a shorter horizontal line, just as the common cross sign used by Christians. The simple cross design is the perfect choice for the first time wearers. You may add substance to the tattoo design by combining it with a dove (to represent peace) or a shamrock (to represent the Irish culture).

Celtic Cross
Celtic cross is similar to the Christian cross, the only difference being the use of Celtic Knot, which is placed over the area where both the lines of the cross intersect. Simple and elegant, the Celtic cross symbolizes the never ending nature of human life, while the knot stands for the conjoint of physical and spiritual worlds. People in Scotland, Ireland and Wales are very fond of the Celtic cross tattoo. Its origin goes back to the early 5th century and is said to have been designed by St Patrick. It was considered as the godly bridge between the god and the humankind. Its vertical arm stands for the godliness of the spiritual world while the horizontal arm is the symbol for the mortal world. Sometimes the Celtic cross is represented with a Celtic trinity knot. This trinity knot makes it purely Christian, signifying the father, the son and the Holy Spirit. At the time of the pagan culture, it represented the mother, the crone and the maiden. It stands for the holy connection between the mind, body and spirit and when it is combined with the cross then it becomes an interlinked, eternal connection between the mind, body, spirit and the holy sacrifice of the lord.

Ankh
Non-religious though, the Ankh cross is similar to the Latin cross in terms of its shape. The only difference between Ankh cross and its religious counterpart is that the former has a vertical line that is bent round to form a loop, just above the horizontal line of the cross. Ankh tattoos symbolizes infinity, fertility. It is a wonderful variation of the original Latin cross.

Gothic Cross
The design of the Gothic cross is influenced by the German style of the ornate wrought iron work that was prevalent during the Victorian and Edwardian Era. The Gothic cross symbolizes the Goth culture. It is a way to express the feelings of depression, pain and anger. Cross tattoos barbed in wire is the most common variation of the Gothic cross.

Tau Cross
The Tau cross is closely connected with Paganism, Judaism, apart from Christianity. In the ancient period, the Tau cross was used as the symbol of the Pagan God Tamuzz as well as to symbolize the Hammer of Thor. The Tau cross tattoo design is characterized by a 'T' with two lines intersecting at the top of the vertical column.