Indian Weddings Home Remedies Ayurveda Vastu Yoga Literature
This write up traces the history of tattooing and tattoos in different parts of the world.
Body Art : History of Tattoo 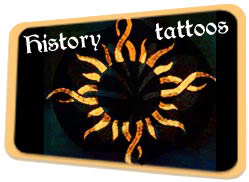 The art of tattoo has become a craze between the youngsters these days. People are spotted with various kinds of tattoos be it religious or zodiac, be it hip-hop figures or simple flowers. Many people also get religious hymns or their beloved's name engraved on their body. However only few people know that this art is not new, it has existed in various parts of the world since immemorial time. Though the style, reason and way of tattooing have been different from place to place, this art has always been symbolic of one's immense love or devotion for some reasons known better to their wearers. Read on to explore the history of tattoos.

Chronological History of Tattoos
The art of tattoo has emerged along with the development the development of Human race. There is no specific time or place to be pointed out with evidence that it was where the tattoos came in being. One of the oldest tattoos was found to be engraved on the back of a man who was buried on the slopes of the Alps. The researches later suggested that his body was buried there 5 thousands years ago. It is from where you can understand that people long back in time were also fascinated by this art.

Many Egyptian Mummies found in the pyramids of Egypt also have tattoos engraved near their waists. It is said that these are basically the mummies of women longing for a child and the tattoos are the symbol of their goddess of fertility. There have been several reports that suggest that in past at some places tattooing was done for medicinal purposes. It is also said that the pigments used in tattooing had some curative or healing effect. The term 'tattoo' is derived from the Polynesian word 'ta' which means to strike something.

If traced chronologically, the history of tattoos can be traced back to both the era primitive and historic culture even before the birth of Christ. At these times this was an art exclusively reserved for either royal lineage or religious figures in the community. This art was also popular amongst Christians before the church edict forbade them on the pretext of some quotes in Bible. Tattoos have since then persisted in various parts of the world of various reasons. At some places it has been the symbol of power and courage and at other disgrace of exile and crime.

Modern Tattooing
Modern Tattooing emerged from the early days of Chatham square in New York City. Charlie Wagner along with Lew Alberts opened a supply business and began early tattoo art. It was when the tattoos became extremely popular. People went for cosmetic surgeries to get tattooed for adding blush, colored lips and eyeliner. However, this craze all of a sudden started disappearing after an outbreak of hepatitis in 1962 in the city. Media reported that it was because of unsterilized tattoo equipments that this disease had spread. However, after sometime the art gradually gained momentum with promised hygiene and safety. Since then there has been no stopping, this art has become popular in various parts of the world one after another.

History of Tattooing in Europe
The recent craze of Tattoo has become style statement in the world. Be it Europe, America or India, this art has become extremely popular in last few years. Though this art has not newly been introduced to world, the craze of this art had never ever gained so much popularity before. Nobody can exactly tell as when this art came into being but ancient evidences like Egyptian mummies tell that this art has existed since a time immemorial.

Modern Tattooing
The art of Tattooing has become a craze amongst youngsters. Not only rock stars or football players but common teenagers also get tattooed to show their fashion forwardness. The current fashion trend rates the tattoo art to be very cool and beautiful. Though this art is not nascent introduced to the world but the craze as it has gained now was never ever present in the past. Read on to explore about the trends of modern tattooing in the world.

Tattooing In Prehistoric Times
Tattooing is basically a body art, through which people accentuate and enhance the look of the body. Though quite common in the present times, did you know that this body art has its roots firmly laid in the prehistoric era? Surprised? Tattooing has a history that goes back till the Neolithic ages. An age old practice, people from various cultures would flaunt tattoos on their bodies for different reasons, even in those times.

History of Tattoos in Africa
Getting tattoos on the body is nothing more than a style statement, for the present generation. However, going back to the pages of history, tattoos in the early ages, were borne not for fashion. Instead, they were generally inscribed in the body, essentially for the medicinal and spiritual qualities. While discussing about tattoos that were impressed in the yesteryears, we cannot miss out on African tattoos,

Tattooing in Australia
Australia has a rich historical background in which art of tattooing has a special place. Date back to almost 40, 000 years, the Samoan tribes and the Maori tribes used to display a wide range of tattoos on some specific parts of their body. In fact, these tribes of Australia represent the major history of tattooing. The Samoan tribes, without signifying any ritual or cultural implication, used to cover their lower body completely with all-embracing tattoos, making their own fashion statements.

Untied States Tattoo History
A tattoo is a design which is permanently carved in the skin with the help of needles and ink. The word came from the Tahitian term "tatua" which means "to mark." This form of art has been used by people of all cultures & countries, for centuries. Even in ancient times decorating the skin with beautiful tattoos was a popular practice, but in the United States, tattoo have recently gained social acceptance.